Muriel is sick, so she sends Courage and Eustace to go to the bakery for her. Eustace gets in his truck and decides to go to eat first. He goes to a place called “Burgers: Really Cheap!”. The owner is a pig named Jonn Bonne. He gives Eustace and Courage burgers. When Courage sees a guy come into a room and not come back, he thinks he was made into a burger because the burger looks just like him. He goes down and sees Jonn Bonne and his wife talking over a silhoutte of a person’s head on a table! The Bonnes go after Courage, but he escapes through the mail slot and runs all the way home. Muriel has gotten better. It turns out the heads were really sculptures made of hamburger meat that Jonn Bonne makes. He, his wife, Eustace and that guy eat one of Eustace. 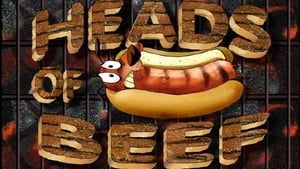 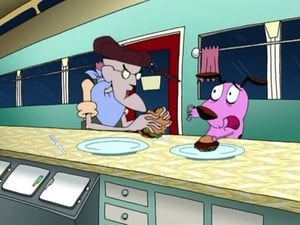