Mazinger Z vs. Devilman is a 1973 animated movie that crossed over two then-popular Anime series, both of which were created by Manga artist Go Nagai. While fighting with some of his enemies Mazinger Z inadvertently knocks them into a volcano, where they crash into the prison of the Satan race and release Phoenix Jenny! Dr. Hell, learning of this, frees the rest of the Satan race and teams up with them to defeat Mazinger Z, and their ability to fly proves to be too much for our hero. Meanwhile, Devilman is also individually fighting the members of the Satan race, but their combined power is too much for him as well; can Mazinger and Devilman put aside their differences and team up to defeat Dr. Hell and the Satan race? 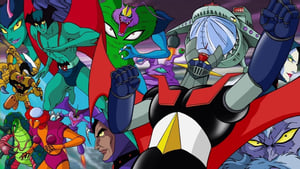